Home Uncategorized Body in the freezer: “Peter” admits to murder but police still doubtful as to how he did it
Uncategorized
October 1, 2016 stefan 0 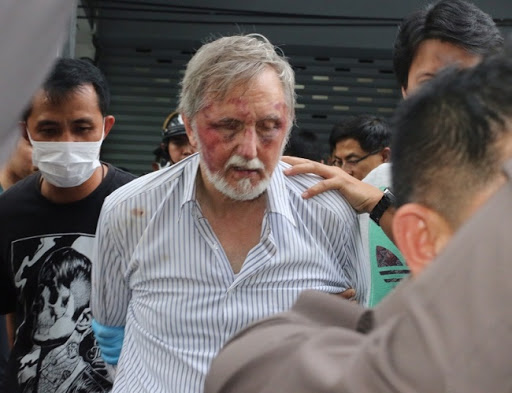 BANGKOK:– A week after the sensational case of the passport gang with the cut up body in the freezer broke in Bangkok the suspected ringleader of the gang has admitted to murder.
“Peter” whose name is still in doubt told investigators at Phrakhanong police station that he attacked the man over a debt.
He was joined in the attack by a man who later died and who he took for cremation to a temple in Huay Kwang, he claimed.
The dead man was believed to be a 40 -45 Hungarian national.
He said the killing happened in 2008. Following the attack he said he didn’t know what to do with the body as he was all of 180 centimeters tall.
After being with the corpse for two days he bought a large freezer, cut him up and put him in it.
But police are still doubtful about this story, reported Matichon.
there were no visible signs of an attack on the body. Police still believe that some kind of poison or drug was used to kill the man, a substance that has since dissipated in the eight years since the murder.
Channel 3 TV news reported that Chula forensics said that the man had died from suffocation or poisoning. He was 40-45 years old at the time of death and 179 centimeters tall. TV news also said he was Hungarian without elaborating.
Sanook.com reported earlier in the day that two sets of cutting equipment were now being examined by forensics at police headquarters.
They also quoted Sanit Mahathavorn of the metropolitan police as saying that fingerprints inside the bin bags used to wrap the cut up body had been identified though no further details were given.
Sanit was still playing things close to his chest though he did say earlier Friday that “matters would be clear before the end of this week”.
Sources: http://bit.ly/2dfgcvq, http://www.matichon.co.th/news/304366, http://news.sanook.com/2076114/
No ratings yet.

“We Love Thailand!” – Expats show the love and TAT hopes to encourage more to the Land of Smiles